“Everyone knows someone, or can relate to someone, who has experienced a mental health issue.”

David Roff is quick to summarise why he and his Actrol colleagues dedicated their fund-raising efforts in support of mental health and well-being and suicide prevention.

A mini-golf competition, raffling-off a set of tools, and guessing how many lollies were in a jar, are just some of the activities the Dunedin commercial refrigeration business used to raise $1000 during November.

And their efforts don’t end there – they support and actively promote the efforts of Mates In Construction – an organisation which helps support mental health amongst construction industry workers, encouraging tradespeople to talk about mental health and seek help for mental health concerns. 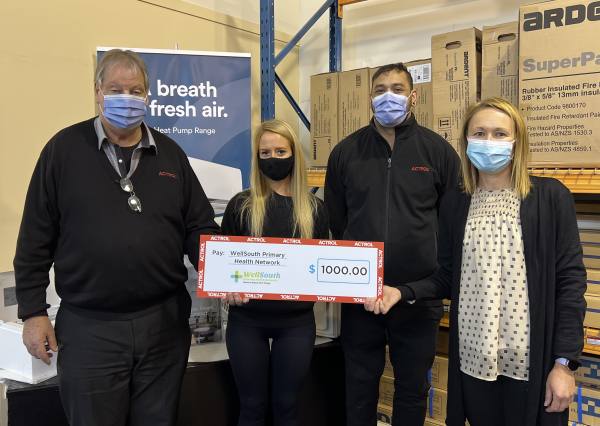 “We might aim to put an extra zero at the end of that donation next year,” says Dave, noting that the Actrol team is planning on a fundraising barbeque and has other ideas in mind.

Looking for a local organisation that aligned with its goals, Actrol chose WellSouth Primary Health Network as the recipient for the generous donation.

The money is being used to help support WellSouth Suicide Prevention-Postvention Co-ordinators to participate in a new  three-day Suicide Studies Course. The course is the foundation to suicide prevention and postvention work covering Suicide and Suicide prevention in specific populations, public health issues and suicide, suicide bereavement and best practice suicide risk assessment and mitigation.

And while the donation will have real impact, WellSouth Clinical Services Manager Stacy Harborow, says it is equally valuable to have teams like Actrol raising awareness that it is okay to talk about mental health and suicide.

“The more we make it acceptable to talk about suicide and encourage people to ask for help, the better off and safer our whānau and communities will be,” Stacy explains. “We all have a role to play and I want to thank Dave, Tosh and Kendra for being great examples for us all.”